Edit on 2020/10/01: As pointed out by Matthew Johnson and Hector Yee, the results reported in a previous version of this post were artificially biaised in favor of JAX due to my code not “advancing” the random number generator. I updated all curves and numbers, and added a little word of caution regarding the use of JAX’s pseudo-random number generator.

The code necessary to reproduce the results can be found here. Tips to make the code run faster are appreciated. I currently only care about getting the last sample of each chain; the number of iterations will eventually be dynamic and I want to avoid pre-allocating too much memory.

Colin Carroll recently wrote an interesting blog post that uses Numpy and a vectorized version of the random walk metropolis algorithm (RWMH) to generate a large number of samples. Running multiple chains at once is used to performing posterior checks on the convergence of algorithms. It was traditionally achieved by running one chain per thread on a multithreaded machine, in Python using joblib or a custom backend. It is cumbersome, but it does the job.

Colin’s post got me very excited about the possibility to sample thousands, millions of chains in parallel with little added cost. He details a couple of possible applications in his post, but I have the gut feeling that there is something bigger waiting around the corner. But this is or another post.

Around the same time I stumbled upon JAX. JAX seems interesting in the context of Probabilistic Programming Languages for several reasons:

Before diving right in and implementing a framework with JAX, I wanted to do a little benchmaking to get an idea of what I am signing up for. Here I will be comparing:

Before giving the results, a few words of caution:

I am sampling an arbitrary Gaussian mixture with 4 components. Using Numpy:

Colin Carroll’s MiniMC has the simplest and most readable implementations of Random Walk Metropolis and Hamiltonian Monte Carlo I have seen. My Numpy implementation is an iteration upon his:

Let us unpack the JAX implementation. The kernel is very similar to Numpy’s:

There are a few things to note here:

Finally, and most importantly, JAX handles pseudo-random number generator in a very specific way and this can be tricky to grasp at first. Notice the line key, subkey = jax.random.split(rng_key). What this line does is return the original key, and subkey which is original key “advanced” one step. If you do not use split you will get a constant value instead of pseudo-random numbers. Please do read the PRNG section in the Gotcha man page. I completely missed this in the previous version of this benchmark, and the performance that I reported where grossly optimistic.

We will use vmap below to vectorize the function. It allows a very neat conceptual separation: a transition kernel advances a chain; it should be the rest of the code’s responsibility to make kernels run in parallel.

The first thing to notice is that the function is written as if there only was a single chain.

If you are familiar with Numpy, the syntax should feel very familiar to you. There are a few differences:

For TFP we use the Random Walk Metropolis algorithm implemented in the library:

We have two degrees of liberty: the number of samples and the number of chains. While the first relies on raw number crunching power, the second also relies on the way vectorization is implemented. I thus decided to benchmark algorithm on both dimensions.

I consider the following cases:

Draw an increasing number of samples with 1,000 chains 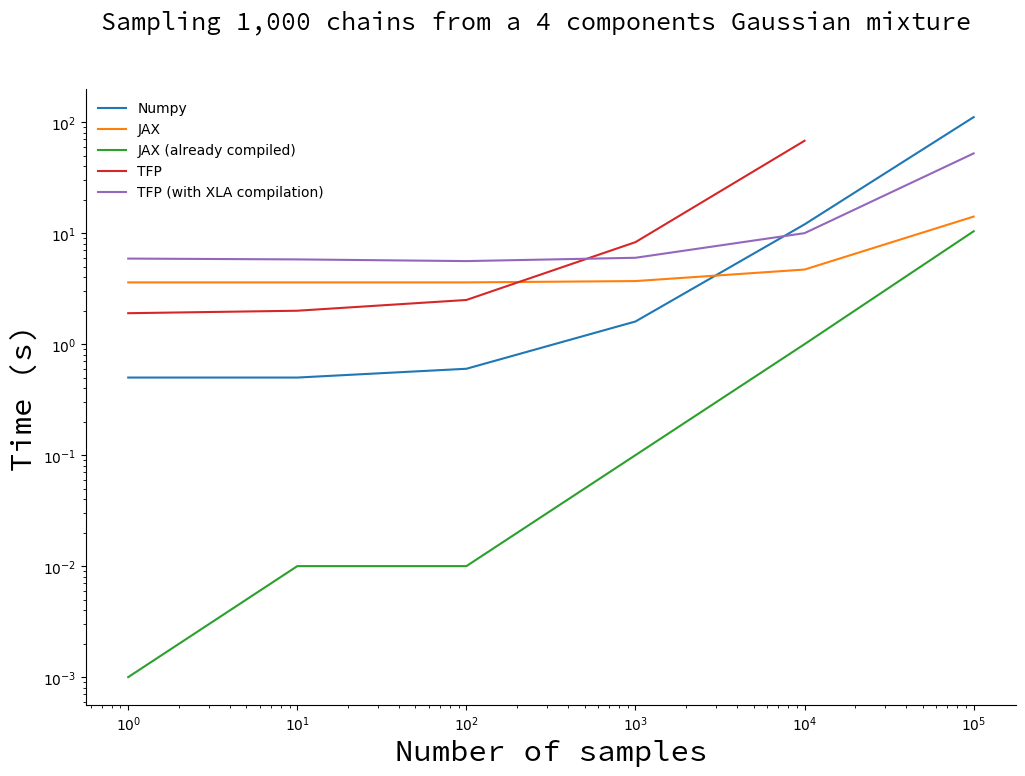 You will notice the missing point for TFP implementation. Since the TFP algorithm stores all the samples, it runs out of memory for large numbers of samples. This did not happen with the XLA-compiled version, probably because it uses more memory-efficient data structures.

For less than 1,000 samples the vanilla TFP and Numpy implementation are faster than their compiled counterparts. This is due to the compilation overhead: when you subtract the compilation time for JAX (thus obtaining the green curve), it becomes faster by a large margin. Only when the number of samples becomes large and the total sampling time is dominated by the time it takes to draw samples do you start to reap the benefits of compilation.

There is no magic: JIT compilation implies a noticeable, but constant, computation overhead.

I would recommend to go with JAX in most cases. Sampling in .3 seconds instead of 3 seconds only matters when this difference is going to be compounded by executing the same piece of code more than ten times. However, compilation is something that only need to happen once; in this case the investment will be paid off before you reach 10 iterations. For all practical purposes, JAX wins.

Draw 1,000 samples with an increasing number of chains 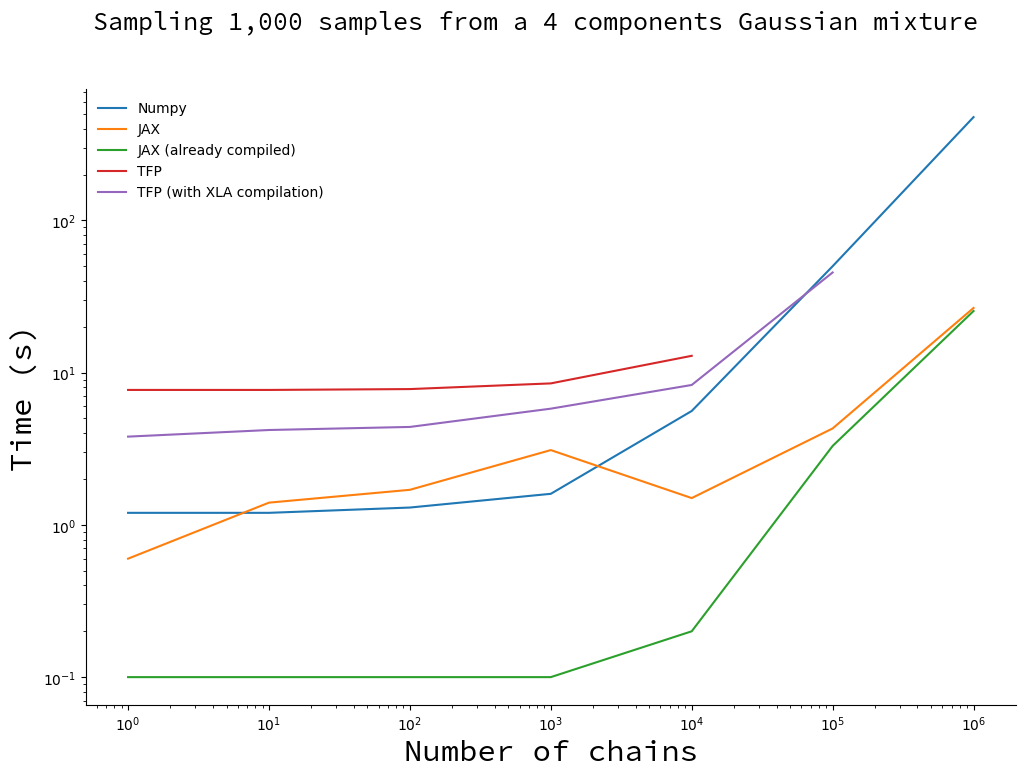 JAX is still a clear winner: it is faster than Numpy as soon as the number of chains reaches 10,000. You will note that there is a bump on the JAX curve, that is entirely due to compilation (the green curve does not have this bump). I do not have an explanation why, so ping me if you have the answer!

JAX can generate a billion samples in 25s on CPU. 20 times faster than Numpy.

For something that allows us to write code in pure python, JAX’s performance is incredible. Numpy still is a decent contender, especially for the smaller numbers where most of JAX’s execution time is spent compiling.

However, Numpy is not suitable for a Probabilistic Programming Language. The implementation of efficient sampling algorithms like Hamiltonian Monte Carlo requires to compute the gradient of the probability density functions. JAX, however, between its performance and autodiff capabilities, has all it takes. No wonder Uber’s team started working with JAX on Numpyro.

Finally, note that it is way easier to scale by multiplying the number of chains than the number of samples. We don’t know what to do with those chains yet, but I have the gut feeling that once we do, probabilistic programming will have another breakthrough.

Stay tuned for the benchmark on Hamiltonian Monte Carlo!